Last Saturday I was sitting at Monical's Pizza, scarfing down a bowl of the red and white salad dressings with some lettuce, when I began pondering the anagrams on my placemat.

I managed to quickly solve the first one, then stumbled over the next three and picked up the last two. For the rest of the salad I remained stumped, unable to fathom the intended sequences.

Unfortunately this is just the sort of luck I have with anagrams; my brain simply refuses to make sense of them. I'm sure I would improve if I made it a point to solve an anagram or two each day, but I've never had the discipline to do so.


If you were only concerned with the number of possible combinations for the first and last letters, then you might come up with a list like this:


However there would be no inherent advantage to this as the number of combinations using all three letters is exactly the same:


The number of unique combinations for the letters in a given word can be expressed as x! (factorial of x). Here, using three letters, we have 3 x 2 x 1 = 6, or 3!, unique combinations for the order of the letters. Again, focusing on the first and last letters here doesn't help much. It's when we examine the differences in a word with four letters that we begin to see the potential.


The number of combinations for the first and last letters can be expressed as x · (x - 1) or x2- x. The advantage of this method is best viewed as the difference of two curves. 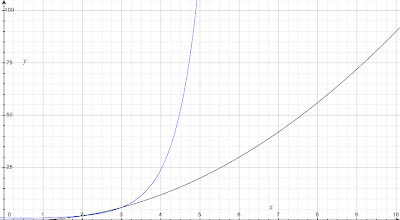 With such a simple method for attacking future anagrams, it was only right that I slap together a BASH script to put this method into practice.

Providing an anagram as the only argument, this script will produce a list containing all possible combinations for the first and last letters without changing the letters in the middle. In the short amount of time I've spent playing with this I've found it to be quite useful. That is, I've found it to be as useful as a helper script for solving anagrams probably can be. Useful ideas aren't nearly as fun, anyway.


EDIT: A real anagram solver can be found here: http://www.ssynth.co.uk/~gay/anagram.html.

09/09/2009 - EDIT: I acknowledge that this is almost entirely limited to "scrambled-word" anagrams. While you could probably use this with actual anagrams, you would of course be limited to solving one-word combinations.